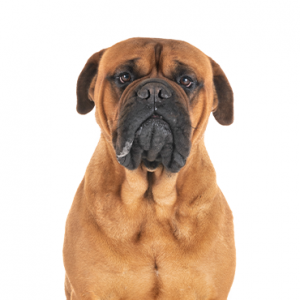 If you’re a serious dog lover, then you would appreciate this able-bodied watchdog in the name of a bullmastiff. One thing is for sure, you could go to bed knowing you’re being watched over and this is quite a good feeling. The bullmastiff is one muscular dog with a fervent loyalty for his owner and this means you’d be very impressed. Discover more about our Bullmastiff puppies for sale below!

This dog breed is descended from the bulldogs and mastiff in the then Old England. They became popular in the 1860s and were more of an asset. They have the ability to sneak up on you and this was very attractive to people. They were used to catch a lot of poachers and they became valuables. They now serve as watchdogs.

The bullmastiff could be very playful and affectionate when they are at home with the family. They are very protective and are quick to become aggressive if they feel threatened. Outside the home, they could be mean to strangers and other canines. They could even bite just to prove a point. They are known to be very stubborn dogs and it is necessary to train and socialize them early.

This dog breed is known for its bulkiness. They are quite muscular and this means you’d have to house them somewhere with a lot of space. Though they do not make a lot of noise moving around, they should be able to do that without knocking down things. A fenced yard would be ideal. They could also adapt well to apartment living but you’d have to make sure the environment is secure and calm too. You should know that the bullmastiff is not very tolerant of humid weather conditions.

The bullmastiff is a big dog and seeing its origin where it was used to catch poachers, you should have an idea of its energy levels. They do need a lot of exercise and you should be committed to this every day. You could let them run with you in the mornings or take them out for long walks later on in the evening. Either way, just be sure they are properly exercised so that they do not have any health problems in the future.

The coat of the bullmastiff is short and somewhat coarse and shouldn’t be an issue to care for. You could brush them weekly and use your hands to massage them during shedding seasons. They, however, have minimal shedding so getting rid of the dead hairs should be easy to do.

You should also take note to clean their mouth area many times a day because they tend to have a lot of saliva dripping out and you don’t want this around the house. Brush his teeth and bathe him occasionally.

The unregulated breeders who are selling outside of the USDA regulations and without a license are what we consider to be “Puppy Mills.” We are committed to offering Bullmastiff puppies who will grow up to become important members of your family. We only purchase puppies from the very best sources, and we stand behind every puppy we sell.

The dog has a stubborn streak and you’d need to establish that you are the leader. You would need to be consistent and very firm to get them to obey instructions.

This dog breed is very muscular but it does have its fears. The bullmastiff could be susceptible to elbow dysplasia, coronary heart disorders, cancers, bone diseases and since they are intolerant to humidity, they could die of heatstroke.

The average life expectancy of the bullmastiff is estimated at 8 to 10 years.

Seeing they are quite energetic dogs, they would need about 1 to 2 hours of exercise daily.

A bullmastiff could be the perfect family dog if socialized right. They are playful, gentle and kind and they do love to cuddle given the circumstances.

A bullmastiff has a stubborn streak and wants to know why it is doing something before it does it. Apart from the fact that they could be overly protective of their owners and their space as a whole, they could be a handful for a first-time owner.

Well, the bullmastiff has a very thin and coarse coat so bathing him should not be a herculean task. The number of times to bathe him would depend on his activity levels and how much he has been around. But on average, once a week should be ideal.

Relatively, yes. They drool before and after they eat, they drool when they see food and even when they are hot or cold or even stressed. This is part of their experience and lifestyle.

Yes, they are. They are particularly aggressive towards other dogs as they really do not get along and towards strangers too.

If you’re in need of a good watchdog, then the Bullmastiff is your best bet.